Username: [silent_voice] of course
Name: Shiva
Age: Ageless
Race: Goddess in human form
Personality: Shiva is calm and decisive, she has no particular interest in whether things happen or not, she finds that history, is just something unwritten, and time, is not important, because she is a goddess, she has no real meaning for time and doesnt see it as many others do. Her calm demure yet yearn to protect the book from anybody, and everybody, is perfect for the job, she refuses to let anybody touch the book, to her, it is perfect the way it is, if people were to alter it, good or bad, they would change things, and what has happened has happened, and should stay that way. Shiva is kind, yet at times, stern
History: Shiva is one of the only humans to ever reach the high level of goddess. Over time, her and the other gods and goddesses have all taken time to help guard this great and almighty power of the book. Shiva herself has guarded the book three times before in her time and is down for her fourth time. She watches over it with the same state each time, calm, and decisive. During the time her, and the god of the flames have had disputes and a war broke out between the two, Shiva being the looser ended up with the heavy scar she holds over her left eye. A burn from the fire demon, and a warning of who is in charge.
Physical Description: Shiva has dark blue hair, with long purple tassles down the sides, her skin is a lighter blue and is freezing to touch, her eyes are purple and her eyebrows are the same colour as her hair, her lips and the same colour as her skin, she wears ice coloured chlothing that barely hides her figure and skin, she has long hair, halfway down her back which tinkles as she walks, she is barefoot and has a purple ankle bracelet on her foot. She has long nails that have a blue tinge to them. Being a goddess she can make her physical appearance change with will, but has decided on this form for this trip to earth, her facial features are delicate and gentle, a soft smile and simple jewlerry on her ears. She has a scar down the left side of her face where she as the goddess was burnt a long time ago, this scar never leaves
Weapons: Shiva does not need any weapons because of her ice powers, her body itself is the weapon, being at below freezing temperature it is an excellent weapon.
Extra: Untouchable. 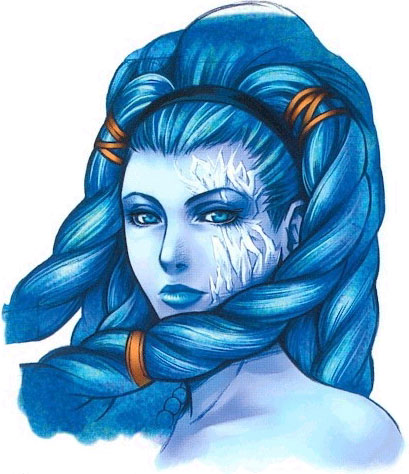