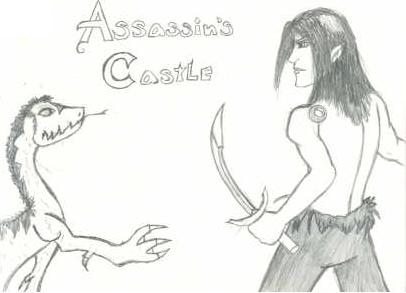 Thanks to [Jenbells] for these banners!

Attention all assassins!!! This is the place for all assasins. Battle, recruit for jobs, duel other assassins, or just talk. Just remember, no matter what you do, HAVE FUN!!!!!!

Announcement. We are now sister wiki to [Neo♥] and her wiki Dragon Knight. It has great potential, but like any wiki, it needs members. Go check it out!

LISTEN UP YOU GUYS. WE DESPERATELY NEED NEW MEMBERS. THIS PLACE IS REALLY A GOOD WIKI, BUT WE DONT HAVE ENOUGH PEOPLE. START RECRUITING!!!! PERSON THAT RECRUITS MOST BECOMES THE FIRST CO-OWNER OF ASSASSIN'S CASTLE. BUT THEY MUST HAVE THE RECRUITERS NAME ON THE APPLICATION

Assassin's History- Short history of the world, namely the races. Also includes how the story is being told, and a small part of the plot.
Assassin's Audition-Go here to apply to be a member.
Assassin's Members
AC beginning- Aquired reading.
The arrivals-Where the original characters met.
New friends and plans fabricated-This is where it all began. In a small tavern among complete strangers.
Hard won battles and new battle scars-The assault on the castle. The story continues here.
Assassin World- This is where any assassin can go to put together a job and recruit people for help. Just remember, the person that recruits you is pretty much your commander. After all, they are paying you. But if i find that an assassin is being unfair, his wiki will be deleted and that assassin will be kicked off of AC.

Other wiki's by [Tekkon KinKreet]:
A Bleeding Hart- Hart City is a dangerous place. Will you aide the bleeding hart?
Assassin Journy- A war ravages the land and a lone messenger stands between the worlds demise and total peace.

2005-12-05 [Tekkon KinKreet]: i havent the time to work on it tonight, but i am going to message you the password so you can work on it if you want

2005-12-05 [Tekkon KinKreet]: ummm ok. here. what i want you to put on there. a members page. (try to keep with the bar theme as much as possible on all of these) maybe a bar fight room, a page for hotel rooms maybe

2007-05-01 [Tekkon KinKreet]: ummm if you want to join, go to the audition page and send me your audition... but the wiki's kinda dead... and i don't have enough ppl to restart it right now... so it's gonna be pretty inactive for awhile.